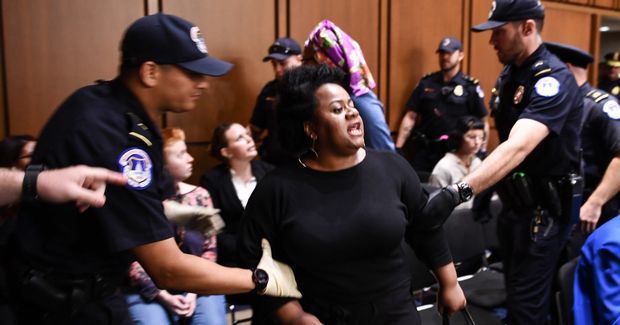 A protestor is escorted out of the room as US Supreme Court nominee Brett Kavanaugh attends the first day of his confirmation hearing in front of the US Senate on Capitol Hill in Washington DC, on September 4, 2018. – President Donald Trump’s newest Supreme Court nominee Brett Kavanaugh is expected to face punishing questioning from Democrats this week over his endorsement of presidential immunity and his opposition to abortion. Some two dozen witnesses are lined up to argue for and against confirming Kavanaugh, who could swing the nine-member high court decidedly in conservatives’ favor for years to come. Democrats have mobilized heavily to prevent his approval. (Photo by Brendan Smialowski / AFP) (Photo credit should read BRENDAN SMIALOWSKI/AFP/Getty Images)